Why should we tax more capital gains? 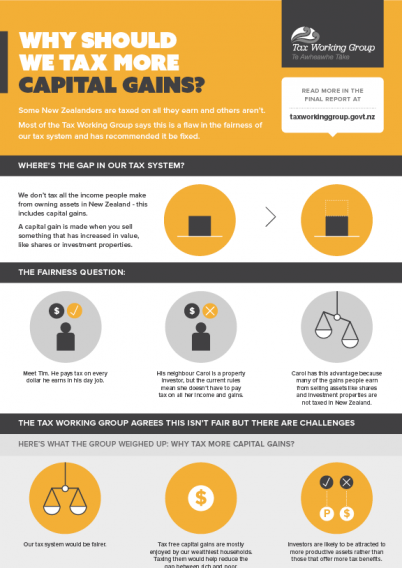 During its deliberations, the Tax Working Group carefully considered the advantages and disadvantages of taxing more capital gains.

It recommended gains on at least rental properties should be taxed and the majority of the Group believe it should apply to most other assets as well.

Here are the factors the Group weighed up.

A capital gain is made when you sell something that has increased in value, like shares or investment properties.  Some of these gains are already taxed in New Zealand, but many aren’t.

Why would they do this?

That’s not fair either.

There are other reasons as well.

Revenue from it would let the Government cut taxes elsewhere, but it also means that the Government won’t be so heavily reliant on taxing salaries and wages in order to pay for things like healthcare.

And it could encourage people to invest in more productive assets rather than ones that offer the most tax benefit.

But there are challenges with taxing more capital gains.

There will be costs for people, businesses, and the Government to keep track of their capital gains and for Inland Revenue to enforce it.

It could reduce some forms of investment if investors have more tax to pay, although the Group has proposed changes to help with this.

People might hold on to their assets for longer to delay paying tax.

And the amount of tax collected each year will go up and down, making it harder for the Government to budget.

Most of the Tax Working Group believe the positives outweigh the negatives, and New Zealand should tax many more types of capital gains, so that’s what they’ve recommended to the Government.